I ordered Dominos Pizza last week and Twitter nearly exploded. So many did not know Dominos supply a gluten free base option. 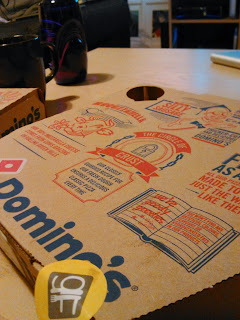 Last year Dominos launched their gluten free base in personal sizes. I was a little apprehensive about gluten free take away pizza. I had been ordering from Credo but was disappointed by it on a number of occasions. When it was good it was very good, when it was bad it was... well you know the old saying. I needed my take away pizza to be consistent. So when I heard about Dominos, I thought let's give it a go. 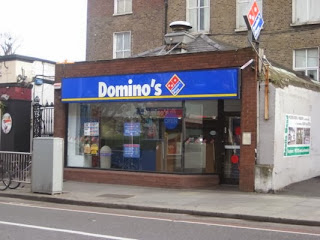 We happened to be in Rathmines so popped into their Dominos branch so I could watch how they handle cross contamination issues. 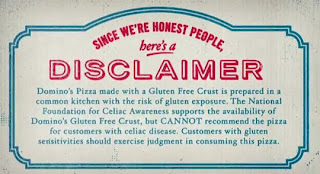 As with the majority of kitchens in Dublin the food is prepared in a "common kitchen." In other words, gluten is present in the kitchen. I'd recommend going in and observing how the pizza is put together in that particular branch. This is why I went in first. In this case one guy was called up from the staff, he washed his hands, put on new gloves, and took utensils from a marked container that was above everything else. My pizza never touched the counter. He held it on a base while he was preparing it and moved down the ingredients counter to the oven. It never touched the counter. 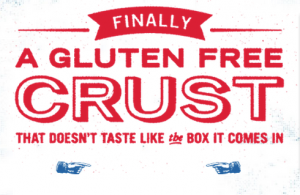 When our pizza's were ready we headed home to inspect them. I was unsure if the bases were actually gluten free because, let's face it, it's been a long time since I had "normal" pizza and I couldn't tell! My other half confirmed it does taste different than the "normal" but not like cardboard so that's a start! 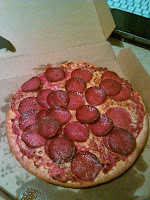 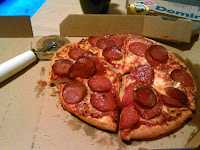 The pizza's come uncut because of the contamination risk so have a knife or a pizza cutter on hand. 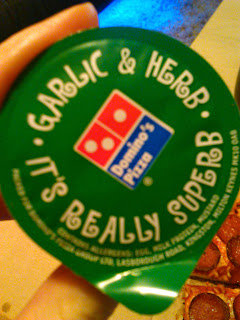 They always come with garlic dip; no other dip has ever come with it. I do have a problem with the fact that there's no allergy advise on it. I prefer to be safe than sorry the majority of the time. On the other hand, they never put another one in so I assumed there's something in the other dips that a gluten free consumer can't have. According to the allergen advice on their sides that's not so; they just haven't been giving anything other than garlic & herb, on any of my orders. 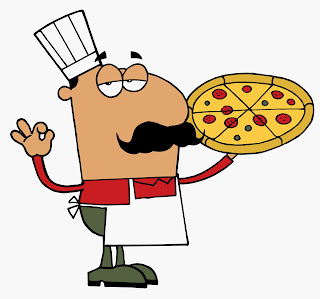 Because they're personal sizes the gluten free pizzas start at €9 with just a cheese and the price scales up depending on your toppings. When you order online you have to choose "Create your own," select the GF base, and start choosing the toppings. Please check the allergy advise for the ingredients. They have a list of the allergens in their toppings here. I would suggest checking it out too! My pepperoni generally costs €10. We order one each in DGF HQ so our typical take-away bill, when we spring for it, is around €20.

We've ordered many times from our local Rathmines Dominos now. I admit, it's the only Dominos I've had gluten free pizza from so I've no comparison in other branches. Let me know how you guys get on with other branches in the comments or on twitter or Facebook!
Posted by Unknown