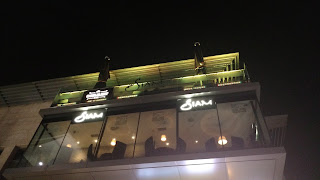 We had a visit to Siam Thai last week..


...and I have to say we were quite impressed. 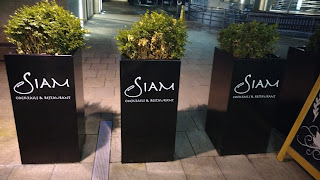 It's no secret we're a fan of Thai food. It's our go-to takeaway option. We love the flavours. Recently I've been noticing some restaurants have been changing their menus and swapping the gluten free for non gluten free. For example, I ordered chicken satay skewers that were marked as gluten free on the menu of one particular Thai restaurant in the city a few weeks ago and as soon as I mentioned gluten free they said that they were fried in the same oil as other non gluten free items. I was a bit annoyed because starters were limited for gluten free, but glad they had the foresight to tell me. 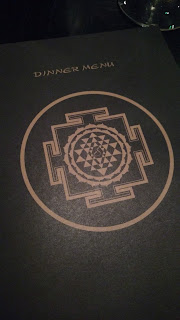 Anyway, last week we went to Siam Thai for a spot of dinner and I was really surprised. 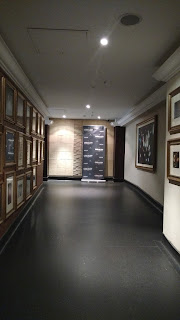 We went to the Dundrum branch after work on a wet and miserable Monday and were delighted to find the restaurant really busy and atmospheric. Normally we head to Douglas and Kaldi in the Dundrum Town Centre but Siam Thai is definitely on my radar now. 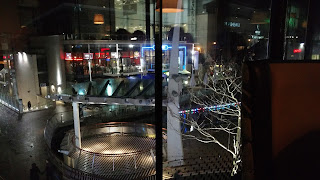 We were tucked into a corner with a great view of the Dundrum fountains and it was a beautiful view that complimented a lovely meal. The restaurant was buzzing for a Monday with patrons. There was even a large birthday party seated on a long table. It was a really great to see a restaurant nearly full at the start of the week. 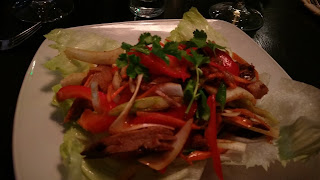 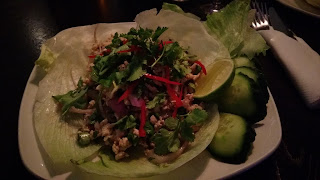 I've been loving the Thai soups and salads lately. Most soups come with mushrooms as standard and as I can't eat mushroom I decided on a Crispy Roast Duck Salad and my other half had Laab Gai. I have to say my duck was amazing. It was tender but crispy on the outside and just delicious. My other half liked his dish but mine was definitely the winner! The portions for a starter portion were pretty big, I would have been ok with it as my main so I actually had to stop myself from finishing it.

We may have accidentally forgotten to take photos of our mains. We sort of just gobbled them up before we had a chance! My other half had the Massaman curry, which is the basic judgement dish for us in any Thai restaurant. It did not disappoint. I had the red curry, which was equally as smooth and delicious.

We had to forego dessert because we ate so much in starters and mains.

On another note, we got to meet one of the owners, Julie, on the night. She explained that a lot of the menu can be adapted to a gluten free diet, even if it's not marked. She advised that it simply depends on the ingredients that the kitchen has in stock on the evening, so there is definitely no harm in asking if you're in for a bite!

Siam Thai currently have two restaurants, one in Dundrum and another in Malahide. They have a secondary areas to their restaurants for drinks as well as food and are on Facebook and Twitter. Check out their menu here.