We've got the winners of the FreeFrom Food Awards Ireland for you!

It's the last days for product entries into the FreeFrom Food Awards 2017. If you're thinking of entering a product here's a bit about them in the last Press Release...

The Coeliac society are running events that may be of interest to you this week!

This Saturday (1st October 2016) the Coeliac Society of Ireland is having a Gluten Free Living Show!
Read more »
Posted by Unknown 5 comments: 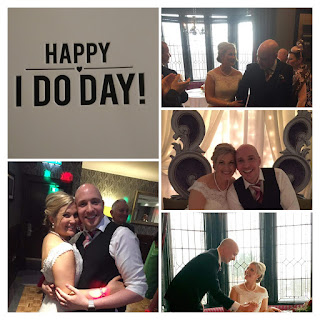 We got married on the 26th March 2016.. This blog post has been over a year in the making!


I wrote some time ago about our little plan to get married and, well, we've done it..  and we had a gluten free wedding with a lot of help from some people in particular!

First thing first, the venue. We toyed with the idea of renting just a venue and getting caterers in and organising everything ourselves in the beginning. We thought it would be more cost effective and also give us more control over the food. It turns out, that's not actually true. 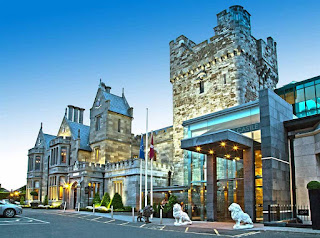 We stumbled across our venue when we were searching for vendors. We were in-between two viewings, did a quick google for wedding fairs, and ended up in Clontarf Castle, where the Sales Manager gave us the grand tour.

We were quite straight with her about what we wanted and we were thrilled to hear that they could do gluten free everything. So we started to plan the rest.

We started exploring cake options... There are lots and lots of cake options. We didn't want a traditional cake. We wanted cupcakes, but not just any cupcakes... super hero themed cupcakes.

We had discovered a Super Mario themed cake and cupcakes by The Cupcake Bloke on Facebook and thought, this is the guy to realise our vision. My other half loves all things geeky, particularly Batman, and I'm quite partial myself, so we explained this to Graham (The Cupcake Bloke) when we met him for a coffee and he ran with our theme and came up with the above as samples. They were delicious by the way! They looked amazing. We were sold.

We discussed the finer details with Graham. Our cupcakes would be four different flavours with a top cake, two tier for structure in lemon curd. 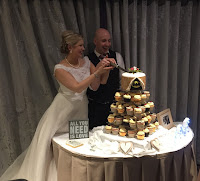 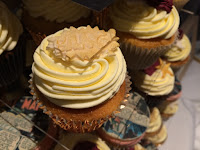 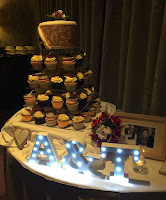 The end result was amazing. Truly stunning. Utterly delicious. Not one fault was uttered by a guest on the day. Visually we were absolutely delighted and taste-wise, let's just say there were no cupcakes left for us the next day! 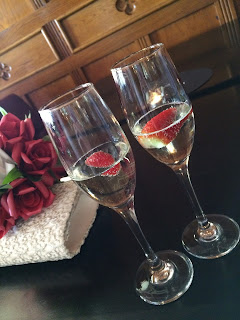 Let's move on to the food for the day! We had a tasting in January and got to meet our chef, who seemed super enthusiastic with ideas, particularly with gluten free desserts. We were quite comforted by this. Amanda, our wedding co-ordinator, was great with everything. Every question we had she answered with precision (we would have been lost without her on the day, she was awesome by the way). 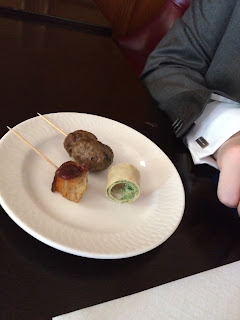 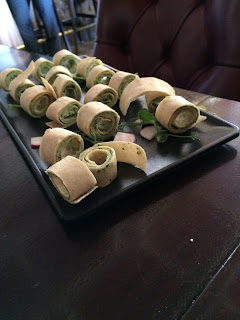 We had canapés at our prosecco reception after our ceremony. I did steal the photos from our wedding guest (one in particular because she loves taking food photos as much as I do!). We had three canapés, as pictured above, all gluten free and one veggie option in there. I'm told they were awesome.. I was slightly preoccupied at the time.. (Photos, prosecco, guests etc.) 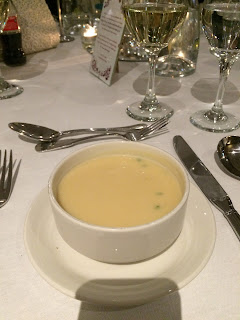 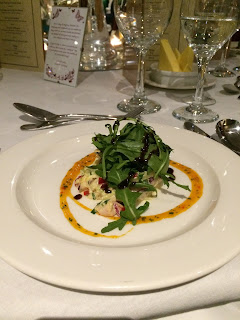 We had a 5 course dinner included on our day, starting with a gorgeous garlic and parsnip soup and followed by an asian chicken salad. We had so many compliments about both. I was super chuffed with our choices. For mains there was a choice of chicken or beef (freaking loved the gravy) and a trio of desserts, consisting of a meringue with strawberry and cream, lemongrass cheesecake topping and a rhubarb compot. All presented beautifully.

We served gluten free bread and rolls with everything. One table asked for a second basket because they gobbled it too quickly. Actually, one asked if the bread that good was actually gluten free because he didn't think it possible. Score for the coeliacs!!! 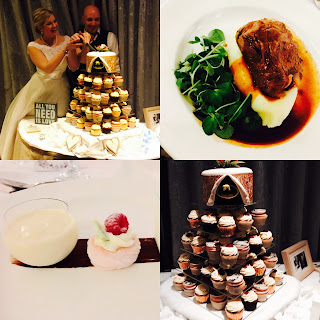 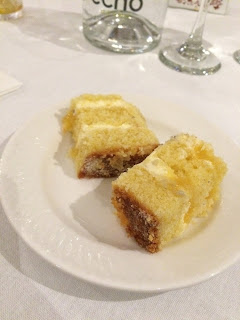 We partied early into the morning and ate everything. There was party food later on that died a quick death with our guests. Gluten free breaded goujons being one of the options!

We had a beautiful breakfast in bed the following morning, complete with prosecco of course and heading off the following day for a few days in New York... but that's another post! 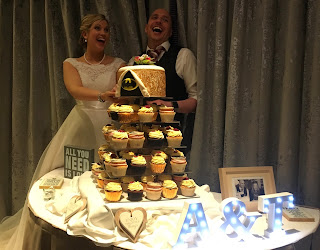 Remember this week, for Coeliac Awareness week, we have a cookbook to give away on the Facebook page so head over there! 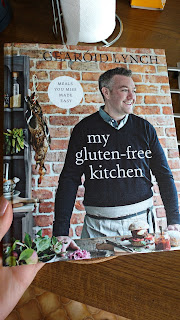 This week we have "My Gluten-Free Kitchen" by Gearóid Lynch to review. 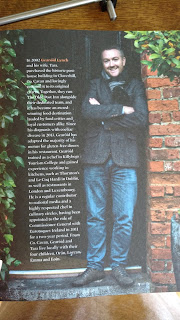 I was quite excited about this opportunity as, quite frankly, it's a gluten free cookbook written by a coeliac! There are lots of cookbooks out there but few that we could be described as "the-go-to" cookbook. This could very well make the list.

The tagline is "Meals you missed made easy." I've tried a few and, they actually are both easy and meals I've missed! We all reach that point where we need to experiment and this cookbook is actually quite a useful tool to get cooking properly again. Nothing takes overly long to cook so you're not stuck in the kitchen for half the day slaving either (although I do enjoy a good experiment it has to be said!).

Whenever I get a new cookbook I generally scan through to see if there are any yummy looking pictures. After all, why would I want to cook something when I don't have a clue what it should look like. However, I stopped dead at the Table of Contents. Look at it! It's huge!! This got me very interested because there are over 200 pages of recipes. Two HUNDRED pages. It was hard, but I selected two dishes to test out. 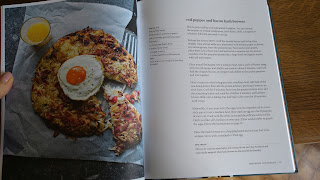 The first was the hash browns. I've been looking for a good hash brown recipe for a while because, well, I can never quite get them to stick together. Because it was the end of the week, I didn't really have all the ingredients so I may have improvised just a little bit on this, but the basic ingredients were present don't worry!

So, as you can see, you need potato, bacon, butter, salt, pepper, red pepper, a shallot, and eggs if you were so inclined. I substituted the streaky bacon with back rashers, simply because I had them and added a chilli. 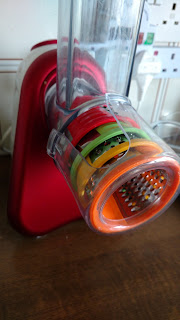 It's a relatively simple recipe, grill the bacon (chop up roughly when done), preheat the oven, grate the potato.. I actually got one of these bad boys last year which came in super handy. I didn't realise how wet potatoes are when they're grated and the useful tip on wringing them out helped. Fry the shallot and pepper in a little butter and mix it all together. 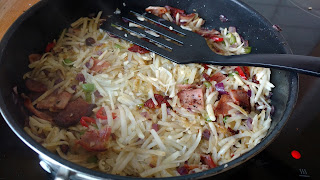 This is where it got a little tricky on me. This looks beautiful, right? Well I popped it all in the large frying pan, spread it out and patted it down as per the instruction and it came time to flip it over. I tried a few times to get it over in one piece, but alas, it wasn't meant to be. It did indeed break. 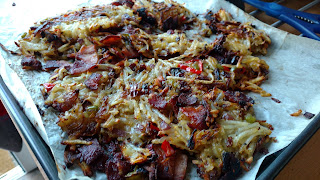 I got it over in the end and fried off the other side as instructed but transferring it to the baking tray was a little too much for it. It's not my most beautiful experiment but I bunged it in the oven to finish the cooking process anyway and got on with me fried eggs when the time neared!

The recipe had said that it should be cut in wedges, but I failed at making it one piece so this was the best I could do! It was actually pretty tasty so I'm putting this one in the win column. 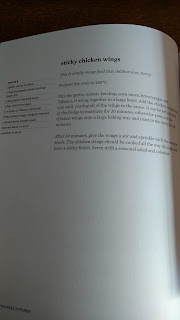 So the second recipe I chose was from the kids favourite section. You heard me, there's no judgement here! We were just in the mood for something nom, well I was, I may have just decided and started to make them.

I do have a small note to make here.. There was no picture on this one and, well, we all know chicken wings should look a certain way. I'd never actually made them from scratch before so when I bought them they had to be prepped. There was no prep note for them here so it took a minute of googling before I (my other half, I actually couldn't handle it) got the technique down.

The sauce was pretty easy actually. It was garlic, Tamari (gluten free soy sauce), brown sugar, homemade tomato sauce, and tabasco if you are so inclined. I really should have remembered that this came from the kids section, we could have done with a lot more spice, but the sauce ended up being super tasty. We actually devoured them once cooked. I made too much so we could freeze, but they ended up in my lunch box. 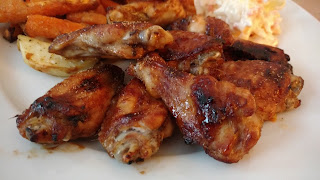 He notes to serve the wings with coleslaw and salad. I had made sweet potato fries to go with and they were just as yum. I'm telling you if you served these at a party, no one would be the wiser.

After playing around with a few recipes in this book, I've come to a thought. There are three types of people that would like to have it in their kitchen: newly diagnosed coeliacs searching for food, people looking to be more versatile in their cooking for coeliacs, and people who are bored with cooking the same things.

Gearoid has some interesting passages on food, there's pages of explanations about types of foods and substitutions suitable for coeliacs, cupboard and storage tips, and explanations on coeliac disease, as well as his own story.

This week, for Coeliac Awareness Week, we have a book to give away so you can decide for yourself! Pop over to the Facebook or Twitter and let us know what recipe you most miss for your chance to get you hands on it..

We had the huge honour if being invited to participate in the FreeFrom Food Awards Ireland this year and it was super exciting!
Read more »
Posted by Unknown 1 comment: